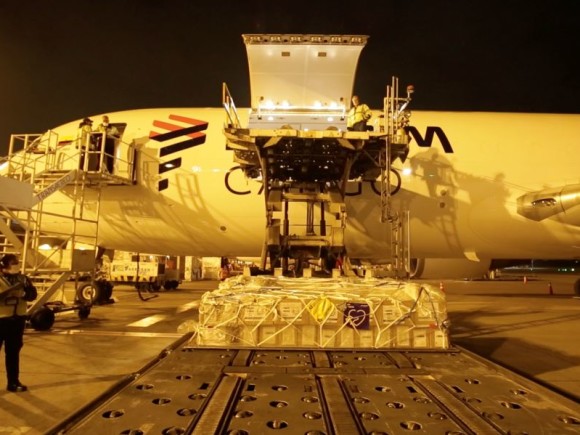 April 19, 2020, Bogotá (Colombia)- In the context of the Solidary Plane program, LATAM Cargo donated the transportation of 2.800 non-perishable food boxes as part of the Ministry of Internal Affairs’s campaign: Colombia está contigo, un millón de familias (Colombia is with you, a million families). This initiative seeks to fight the pandemic and will benefit vulnerable families from Buenaventura.

Supported by air transport’s promptness and effectiveness, LATAM hopes to contribute to the National Government’s efforts to distribute aid in the shortest possible time.  Thus, a 58-ton maximum capacity Boeing 767-300F, part of the Group’s international operation, was chosen for the flight starting Saturday night and traveling from Bogotá to Cali.

“Supporting governments in their fight against COVID-19 and its impact on society is our priority. Hence, we have made our experience, connectivity and transportation capability available. During these critical times we are even more committed to delivering supplies to countries in which we operate, as we are aware of the key role we play in transporting goods for the region”, stated Andrés Bianchi, LATAM Cargo Group’s CEO.

LATAM will continue working in partnership with the National Government and other players that are mobilizing aid for the Colombian community. This way, the company wishes to contribute so the aid reaches families in need on time.

“Colombia has been fundamental for LATAM’s growth during the last few years. Thus, during this crisis we are committed to aiding the most vulnerable Colombian communities along with the national government, as this COVID-19 emergency affects us all. Our Solidary Plane program reflects LATAM’s conviction that air connectivity is essential in uniting our countries to confront adversities. This is why we will continue making all the necessary efforts to overcome this crisis together” stated Santiago Ávarez, LATAM Airlines Colombia’s Executive Director.

LATAM Airlines Group is the main airline group in Latin America and one of the largest in the world in connections network, offering air services to 145 destinations in 26 countries. It operates in six Latin American domestic markets: Argentina, Brazil, Chile, Colombia, Ecuador and Peru, in addition to international flights within Latin America and heading to Europe, USA, the Caribbean, Oceania, Africa and Asia.

With a modern and young fleet, LATAM Airlines Group owns 332 airplanes, among them Boeing 787s, Airbus A350s, A321s and A320s neo, the most modern models in this segment.

LATAM Cargo is the Group’s business unit specialized in air cargo transportation. It transports cargo both in passenger aircraft’s bellies and in its 11 Boeing 767 freighters. LATAM Cargo offers modern infrastructure, a wide range of services and care options to satisfy its clients’ needs.

LATAM Airlines Group is the only airline group in America, and one of three in the world, to join the Dow Jones World Sustainability Index. For the sixth consecutive year, the Group was acknowledged for sustainable practices, based on economic, social and environmental criteria.

LATAM Airlines Group’s shares are traded as ADRs on the Santiago and New York Stock Exchanges.