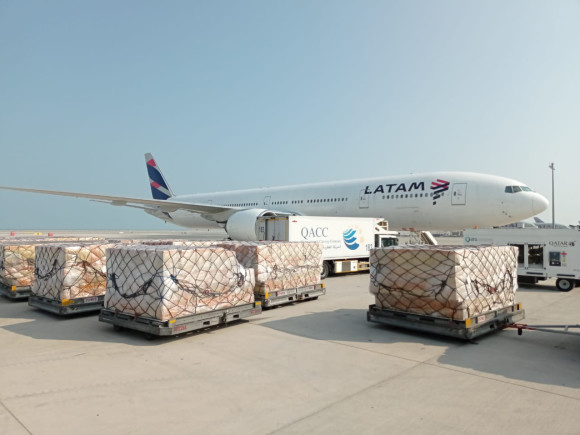 ●        The flights were operated by LATAM Airlines Brazil during Chile’s high fruit season. This took place, specifically, to export cherries to Asia and import electronics to Latin America.

●        The goods were carried in a B777-300 aircraft used exclusively for cargo transportation. Once in Doha, the shipment was transferred to the interline partner, Qatar Airways, for the corresponding trip to Shanghai.

●        A team of more than 50 people participated in this route’s preparation and coordination process.

December, 2020.- On November 30, 2020, a memorable flight for LATAM Group began its journey. For the first time, one of the Group’s aircraft, operated by LATAM Airlines Brazil, landed in Doha, Qatar, transporting perishables from LATAM Cargo customers in South America to Asia and returning to Latin America with electronic products.

“Landing in Qatar for the first time is a clear demonstration of our commitment to satisfy our cargo customers’ needs. With our subsidiaries’ support, we managed to successfully coordinate and implement a route that allowed us to reduce transportation times to our clients’ relevant markets, while supporting South America’s export and import markets,” stated Kamal Hadad, LATAM Cargo’s Network and Alliances VP.

The second flight departed on December 07 towards Doha. In total, these operations made it possible for LATAM Cargo to transport over 95 tons of fresh fruit, which connected with its interline partner, Qatar Airways, to continue their journey towards Shanghai. They also allowed for more than 60 tons of electronics to be transported into Brazilian and Chilean markets, just in time to meet the high Christmas season demand.

LATAM Cargo maintained its strategy and used passenger aircraft exclusively for cargo transportation. By doing so during the pandemic, the company has been able to mitigate the belly capacity reduction caused by international closed-border policies. Particularly, this B777-300 departed from Guarulhos airport in Brazil towards Santiago, Chile, with a technical stop in Recife, Brazil, before continuing its journey to Doha, Qatar. The return flight ended in Guarulhos, Brazil.

More than 50 people from different departments were responsible for this operation’s implementation and logistics, which totaled 18 flight hours from its origin in Brazil until its final destination in Doha.

“While this route is temporary and responsive to the high fruit season in Chile and the greater demand for electronics during Christmas, we will continue to adapt our operation to satisfy our clients’ needs and carry South American products to the world,” stated Mr. Hadad.

During the pandemic, LATAM Cargo Group has modified its itinerary and operation in several ways in order to mitigate the negative effects that belly capacity restrictions may have on customers. Likewise, the company is constantly evaluating its operation in order to satisfy its clients’ needs.

One of the highlighted measures includes the utilization of passenger aircraft exclusively for cargo transportation on a regular basis. This occurs both in international and domestic routes using different aircraft, including B777, B787, B767, A320 and A321. In some cases, seat containers have been used to optimize cargo transportation capacity in passenger aircraft. Through this strategy, LATAM Cargo complements the capacity offered by its exclusive freighter fleet, consisting of 11 B767Fs.

Regarding routes and frequencies, the company has adopted measures to ensure capacity towards key markets. For example, the cargo capacity between Santiago (Chile) and Miami (USA) was multiplied by five, going from 6 to 31 weekly frequencies in order to offer salmon exporters—one of Chile’s main industries—a robust solution. Frequencies between Bogota and Miami were also increased by 28%, going from 14 to 18 frequencies. In addition to the 5 frequencies originating in Medellin, the company offers a total of 22 frequencies between Colombia and the United States in order to support flower exporters.

LATAM Cargo also increased connectivity between Miami and South America and from Europe to South America. Finally, during this period, the Group has launched direct routes to benefit different industrial sectors in the countries where it operates. These include the routes between North America and Brazil, or the new cargo destinations, Los Angeles and Mexico.