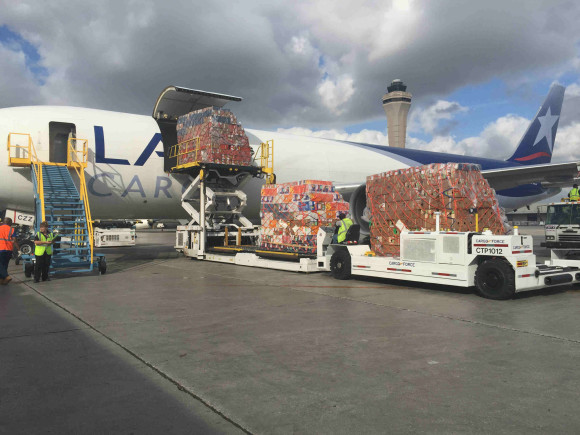 The U.S. Customs and Border Protection (CBP), the Miami-Dade Aviation Department and LAN CARGO held a joint press conference on flower imports at the company’s facilities in Miami, just five days prior to Valentine’s Day.

The event was given the name of Flower Power and was headed by CBP Commissioner Richard Gil Kerlikowske, Miami-Dade Aviation Department Director Emilio T. González and LAN CARGO’s COO Fernando Poitevin. The goal was for the press to get acquainted with the procedures involved in the transport and import of flowers at the busiest international freight airport in the United States.

More than 90% of all flowers imported by the U.S. pass through Miami and, during the weeks leading to Valentine’s Day, incoming volumes can sometimes quadruple the daily average. During the event, the media witnessed the regular flow of flowers, as well as inspection, storage and delivery procedures.

Emilio T. González, Richard Gil Kerlikowske and Fernando Poitevin spoke to the press and answered questions regarding the flower import process. CBP inspectors also demonstrated the different controls that the product is subjected to at the airport. Finally, LAN CARGO offered reporters a guided tour of its facilities, including one of the largest cold storage warehouses in the U.S.

We are very pleased to have been part of this initiative. St. Valentine’s is one of the most important seasons of the year for the industry and LAN CARGO and its affilaites have extensive experience covering it. We jointly transported and handled 10,400 tons of flowers to the U.S. in early 2015 alone, which generated income and jobs in Miami. It is a very important business, both for the company and for the county”, Fernando Poitevin LAN CARGO’s COO.

CBP is the largest federal law enforcement agency of the U.S. Department of Homeland Security. With headquarters in Washington D.C. and a workforce of more than 45,000 officers, the agency is responsible for enforcing U.S. regulations and protecting its agricultural and economic interests, regulating and facilitating international trade and import rights, stemming the flow of illegal drugs and other types of illegal trade, and preventing pests and diseases from entering the country.

Miami International Airport was chosen as the venue for the event because of its nationwide relevance. It is the second-busiest airport for international passengers in the U.S. and the top airport for international freight. It is also an important source of income for Miami-Dade County and the state of Florida, generating US$33.5 billion in revenue annually and welcoming 70% of international visitors to the state. Its goal is to become the most recognized hub in the hemisphere, offering customers a world-class experience, while connecting passengers and cargo to all world regions.