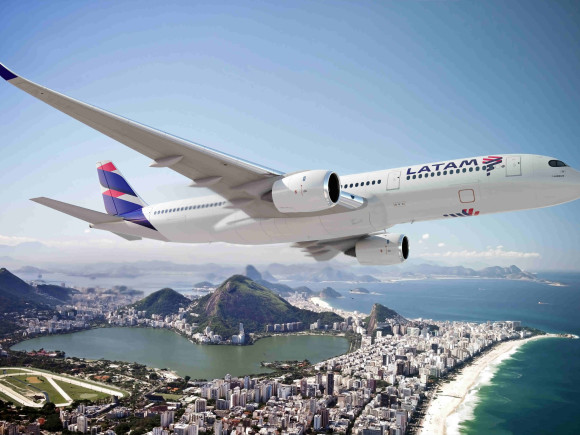 Winds have lately changed in the Latin American cargo landscape. Most sub-markets are growing again, leaving the long drought slowly behind. Particularly Brazil, the largest economy south of the Rio Grande, is picking up speed, despite ongoing political turmoil.
A market drop of close to 30 percent on the overall market and nearly 50 percent on central freighter lanes during the last five years: it was the worst ever recession the country has experienced in a long time. If Brazil gets the flu, freight carriers operating in Latin America are likely to get pneumonia.

The crisis forced the management to react

LATAM Cargo was no exception to this. Hence, the company had to take appropriate countermeasures to better weather the heavy storms caused by contracting volumes and tumbling freight rates. “The crisis forced us to react”, reasons Andrés Bianchi, newly appointed VP Cargo at LATAM who took the chair on 15 April and who is based in Miami, the carrier’s strategically most important hub in its entire network.

The reaction Andrés speaks of consisted of streamlining the organization and business processes, introducing new products and reducing the freighter fleet, hence adjusting the main deck capacity to market demand.

It has been confirmed to CargoForwarder Global that over the last three years approximately 20% of total jobs were cut to reduce overheads and costs. A harsh decision, but one that has obviously paid off as recent figures evidence, Bianchi stresses. “Today, we have got the right cost structure, the right network and a highly attractive product and service portfolio”.

Europe picking up as well

Guido Henke, LATAM Cargo’s Director Europe, confirms the positive tendency, seen by growing exports from Europe to Brazil and other sub-markets in South America. “The worst seems to be over; we look to the future with optimism”. An assessment confirmed by LATAM Cargo’s Gabriel Oliva, Senior VP Commercial North America, Europe and Asia, who affirms growing volumes from and to the USA.

Taking the LATAM Cargo chair only on 15 April, Andrés and his team can start reaping the fruits sown before by his predecessor Cristián Ureta and his managerial staff, of which Andrés was part of in his role as former Senior VP Sales of North America, Europe and Asia.

Major fleet adjustments were a key part of the restructuring process. The outcome: Three Boeing 777Fs have been leased to other carriers, from the former fleet of 16 freighter aircraft flying in LATAM Cargo colors three years ago, only 11 are kept of which a number are leased to other airlines. Later this year, the carrier plans to return a Boeing 767F and two Triple Seven freighters back into its fleet. LATAM Cargo’s fleet plan contemplates that by the end of 2017 eight 767Fs and a single B 777F out of their two 777Fs will be operated. The second B777F is subleased to AeroLogic, a Leipzig, Germany-based subsidiary of LH Cargo and DHL Express (50/50%)
Bianchi explains: “Simultaneously to resizing our main deck capacity we shifted part of our cargo traffic over to the LATAM passenger side to accommodate the shipments in the lower deck compartments of our passenger fleet, this way strengthening our belly-hold business and keeping customers on board”.

Nonetheless, he admits that operating freighters continues to be a challenge despite the latest market recovery and the resizing of the fleet.

Asked about the carrier’s future fleet plans, LATAM Cargo‘s helmsman points out that all-cargo aircraft will always remain being part of the airlines’ strategy. “We are and we will continue being a combination carrier.”

The tentative steps of Chinese carriers into the Latin American air freight market he sees as being of limited threat due to the economics and the seasonality of demand. Due to the vast distances between the Far East and South America, a Boeing 777 freighter can only operate two rotations per week, which at the end of the day produces high costs and leaves little money in the carrier’s cash box – if any.

Smarter and more cost efficient would be creating reasonable interline agreements, leading to agreements for transiting freight consignments from one airline to the other, which could happen in Los Angeles, New York or at some other North American Airports. Such deals might be attractive for flying perishables from South America to China, a much-desired commodity by consumers in Far East.