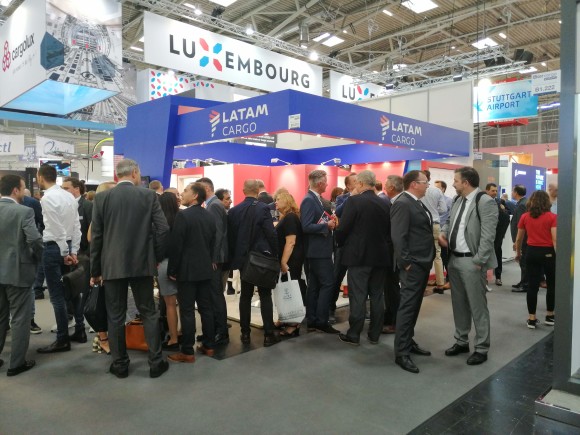 Air Cargo Europe, one the largest logistics fairs in the world was held on June 4-7 in the city of Munich, Germany. The event gathers the main actors of the logistics chain around trade issues and trends and serves as a starting point for meetings, new businesses and partnerships.

In line with the times, the main topics were the trade war between the USA and China, the New Silk Road, the digitalization of the industry and its impact on customers, and the high expectations placed on the implementation of artificial intelligence in several areas, among other topics covered during the 40+ lectures in the agenda.

LATAM Cargo was represented by executives from the commercial, network, marketing and operations departments, who conducted their activities in a state-of-the-art stand. The team was led by Andrés Bianchi, CEO of LATAM Cargo; Gabriel Oliva, Commercial Director for North America, Europe and Asia; Kamal Hadad, Network Director; Patricio Hurtado, Development and Marketing Director; and Diego García from the Operations Department.

During the four days of the fair, the executives shared with the sector’s leading actors in more than 35 meetings with decision makers. The Commercial team took the opportunity to meet with global and local customers to share their visions on the Latin American market, explore growth opportunities and strengthen bonds, in addition to contacting companies interested in doing business with LATAM Cargo.

For its part, the Network team met with important interline partners like American Airlines, IAG and Cathay Pacific as well as representatives from major international airports together with the Handling and Operations team. The latter also met with existing and potential vendors.

In addition to the meetings, two milestones deserve a special note: the Marketing area officially launched the new corporate video that presents the company’s credentials and position as a world class carrier and organized a cocktail party in its booth called “LATAM Cargo get together”, which gathered customers in a relaxed and celebrated meeting.